Pittsgrove, NJ, January 3, 2019. Professional Edge Fishing, Inc., a brand and angler representation company, has announced the sponsorship of Major League Fishing Pro angler Mike Iaconelli by Wyld Gear, makers of the ingenious divided series hard cooler, soft coolers and drinkware. Wyld Gear is also a proud supporter of The Ike Foundation®, Iaconelli’s non-profit organization whose goal is to introduce urban children to the wholesome sport of fishing while instilling a love and respect for the outdoors. 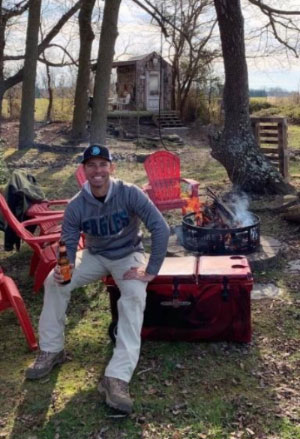 Iaconelli, excited about the new partnership, says, “Wyld Gear has definitely designed the perfect cooler with their insulated Hard Cooler Divided Series! Two chambers means I can keep my drinks cold and my food dry OR even use one side as a livewell since there’s an aerator built in…how awesome is that?! It’s even got heavy duty steel wheels, a mounted bottle opener and a spout.” The high energy angler adds, “I’m also impressed with their lightweight soft side cooler and the tumblers are amazing!” Wyld Gear is also a proud supporter of The Ike Foundation®, “I love that we’ve got the support of Wyld Gear and that they share our vision when it comes to getting kids in the outdoors.”

Wyld Gear is two years young with revolutionary storage ideas. The Divided Series Cooler and Wyld Cup were inspired through conversations with local fisherman and fishing guides. Those talks revealed that there was an unfulfilled need in the cooler and tumbler market. After lots of research, they got to work on the manufacturing and distribution process and the result is a fully functional 2 in 1 cooler on wheels and a double wall, stainless steel party cup, both products are unique to their categories in the cooler and tumbler markets.
Mike Stillwell of Wyld Gear says, “The entire crew at Wyld Gear is extremely excited about our new partnership with Ike! Being heavily involved in tournament fishing myself and knowing Ike’s status in the professional fishing industry, he was the obvious ‘Wyld man’ I wanted to reach out to. His over the top passion for fishing and getting kids involved early makes people gravitate to him. Ike does great things with The Ike Foundation® and really gives back to the community. Wyld Gear believes in their vision and we are honored to be a partner with Mike Iaconelli and supporters of The Ike Foundation®.”

Wyld Gear are makers of rugged and boldly designed hard and soft coolers, drink wear and outdoor gear. Their innovative Divided Series Cooler has two patented divided chambers to separate hot and cold items (or beverages and bait) and heavy-duty steel wheels for when you’re on the move. Wyld Gear